www.tithebarn.us and www.tithebarn.global are the exclusive domains and trademarks of Layman Lessons Church and our core tenet of our Religious exercise, practicing God’s direct command in the Holy Bible scripture Malachi 3:10 “Bring the whole tithe into the storehouse, that there may be FOOD in my house. Test me in this,” says the Lord Almighty, “and see if I will not throw open the floodgates of heaven and pour out so much blessing that there will not be room enough to store it..”  The “Tithe Barn” IS the “Storehouse” to store FOOD procured with TITHES that are to be spent only so FOOD is in the storehouse from which God’s people feed the local poor and needy who cannot provide for themselves. This act of unconditional love by God’s people as God’s “hands and feet” to His beloved poor & needy is our Religious focus.
​The word “barn” is from the Old English “bere”, for barley (or grain in general), and “aern”, for a storage place—thus, a storehouse for barley.

The modern barn largely developed from the three aisled medieval barn, commonly known as the “TITHE BARN” or “MONASTIC BARN”.

A tithe barn was a type of barn used in much of northern Europe in the Middle Ages for storing tithes. Farmers were required to give one-tenth of their produce to the established Church.

Tithe barns were usually associated with a village church so independent farmers took their tithes there so the local poor and needy could be fed by the local Church as God intended, evidenced by Deuteronomy 26:12 “When you have finished laying aside all the tithe of your increase in the third year—the year of tithing—and have given it to the Levite, the stranger, the fatherless, and the widow, so that they may eat within your gates and be filled.”

To Layman Lessons Church, our “Tithe Barn” function to feed the local needy in God’s name is the core of our Religious exercise in obedience to God of the Holy Bible.

In the 15th century several thousands of these huge tithe barns were to be found in Western Europe, just a few are shown in the photos below out of hundreds across Europe, the most famous being the “Bradford on the Avon Tithe Barn”. In the course of time, its construction method was adopted by normal farms and it gradually spread to simpler buildings and other rural areas.

Today, Tithe Barns in Europe are tourist attractions, events venues, but remain a huge part of history of the Church and local villages who fed their own local poor and needy, in God’s name, as God intended.

Whenever stone walls were applied, the aisled timber frame often gave way to single-naved buildings. A special type were byre-dwellings, which included living quarters, byres and stables, such as the Frisian farmhouse or Gulf house and the Black Forest house.

In the U.S.A. older barns were built from timbers hewn from trees on the farm and built as a log crib barn or timber frame, although stone barns were sometimes built in areas where stone was a cheaper building material.

In the mid to late 19th century in the U.S. barn framing methods began to shift away from traditional timber framing to “truss framed” or “plank framed” buildings. Truss or plank framed barns reduced the number of timbers instead using dimensional lumber for the rafters, joists, and sometimes the trusses.

Concrete block began to be used for barns in the early 20th century in the U.S. as is the case with our Tithe Barn built in 1941 in Madison, TN, now 77 years old with a good 50-75 years of solid service remaining! 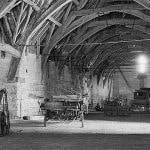 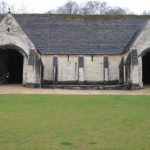 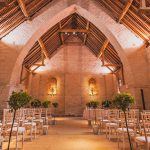 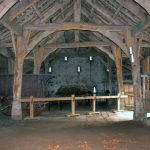 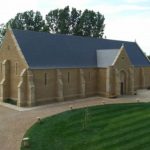 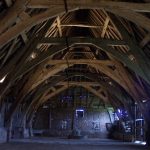 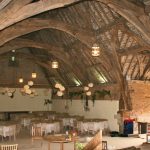 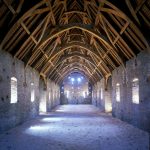 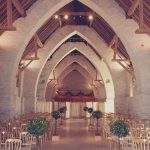 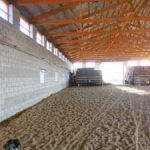